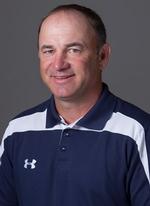 Tim Barrera enters his 27th season as a head coach with a career record of 263-215-44 record. In his 21 years at UNC, he has posted a record of 199-172-41. He has more than doubled the previous Northern Colorado record for wins by a soccer head coach and now has more wins than the rest of the UNC soccer coaches combined.

Barrera led UNC to the NCAA Tournament in 2015 and 2019 and the program has been in the Big Sky Championship game in four of the past five years. He is the longest-tenured head coach at Northern Colorado.

Since the program joined the Big Sky in 2006, Barrera has coached two Offensive MVPs, four Defensive MVPs, three Goalkeepers of the Year and two Top Newcomers. He has placed a student-athlete on the All-Big Sky team 47 times.

To go along with his most recent Big Sky championship, Barrera has also led Northern Colorado to a pair of North Central Conference championships (1999 and 2001) and a pair of Division II NCAA tournament berths (2001 and 2002). His squads have also won six National Soccer Coaches Association of America academic awards and four NSCAA team ethics awards. His teams also have won 13 or more games four times. In his first year at the helm of the Bears program in 1999, Barrera was named NCC coach of the year.

Barrera helped Northern Colorado's Mandy Nilsen become a two-time All-American, in 1999 and 2001. She was the only Division II athlete to make the NSCAA/Adidas All-American Scholar first-team, and she graduated from Northern Colorado holding virtually every Bears scoring record.

Before joining the Northern Colorado staff, Barrera served as head coach at Elmira College in Elmira, N.Y. In five years there, he led the Soaring Eagles to five consecutive winning seasons, posting a 58-31-3 (.647) record overall. During Barrera's tenure, Elmira earned its first NCAA and Eastern Collegiate Athletic Conference (ECAC) postseason appearances (1997 and 1998). In the process, Barrera produced six NSCAA Regional All-American performers and six NSCAA All-Academic Scholars, while his squads received team academic and ethics awards from the NSCAA in 1997 and 1998.

While at Elmira, Barrera was also active in the governance of collegiate women's soccer, as he served as the chairman of the New York State Women's Collegiate Athletics Association (NYSWCAA) Soccer Committee. He was also a member of the New York Regional Ranking Committee.

Prior to arriving at Elmira, Barrera spent one year (1993) as head women's coach at Wilkes University in Wilkes-Barre, Pa., one year as director of player development at the Northeast Attack Soccer Club (in Wilkes-Barre) and one year as a student assistant coach at Virginia Tech. He holds a B License from the United States Soccer Federation (USSF) and a premier diploma from the NSCAA.

Barrera earned his bachelor's degree from Virginia Tech in 1986 and his master's degree from Elmira College in 1998. While at Virginia Tech, he was a four-year starter (1981-84) and graduated as the program's all-time leading scorer with 19 goals. He was named to the Virginia all-state team as a senior (1984) and was also honored as the team's most valuable player after helping the Hokies to an 8-8-2 record under legendary coach Jerry Cheynet (238 career wins).

Year-by-Year
Northern Colorado earned its second-ever trip to the NCAA Division I Tournament in 2019 by winning the Big Sky Tournament in Greeley. The Bears entered as the No. 4 seed defeating Northern Arizona and Montana in overtime before beating Eastern Washington 1-0 in the championship match. UNC went on to face Colorado in the first round of the NCAA Tournament finishing the year with a 9-11-4 record. Maddie Barkow was named co-Big Sky Defensive Player of the Year and a spot on the All-Big Sky first team. Three other Bears made second team All-Big Sky in Lindsi Jennings, Lexi Pulley and Olivia Seddon. Three more earned honorable mentions.

The 2018 season was one of the best in the history of the Bears program. They made history by becoming the first Big Sky program to make the conference tournament in six consecutive seasons. The Bears made it to the title game for the second-straight season. With a win over Idaho in the second round of the tournament, UNC notched its 300th win in school history.

In 2015, Barrera led the Bears to a 13-8-2 overall record, 7-2-1 in the conference, and a Big Sky championship after defeating Idaho in penalty kicks. Barrera’s first conference title, it earned the Bears a berth in the NCAA tournament, where they faced the Pac-12’s Arizona Wildcats.

Adrienne Jordan also became Berrera's first player drafted in the National Women’s Soccer League (NWSL), going in the fourth round to the Chicago Red Stars. She has since signed to play with Sweden’s Ostersund and earned a spot on the United States's under-23 national team.

In 2014, Barrera and the Bears made a trip back to the Big Sky Championships for the fourth time. The team also was recognized for the fourth straight year for academic performance by the National Soccer Coaches Association of America. Seven Bears earned all-conference selections while Natalie D'Adamio garnered Co-Goalkeeper of the Year, her second consecutive award. Thirteen were also named to the Big Sky All-Academic team.

Following a banner 2011 season, Barrera’s team got off to a strong start in 2012, going 3-0 to open Big Sky Conference play and earning a ranking in a national poll before falling shy of qualifying for the conference tournament via a fourth-place tiebreaker with Weber State.

The Big Sky recognized eight members of the 2012 team as all-conference, including D’Adamio, Goalkeeper of the Year.  Twelve student-athletes were named academic all-conference.

Led by several gifted seniors, 2011 was one of Barrera's best with the Bears as he helped lead Northern Colorado to a share of its first Big Sky soccer championship. The Bears finished the season 8-7-5 (4-1-2 Big Sky) and tied with Portland State for the best conference record. Since the Bears defeated Portland State earlier in the year, they earned the right to host their first Big Sky Women's Soccer Championship. Eventually, Barrera saw his team's season end in a penalty-kicks loss to Montana in the tournament semifinals.

Barrera's 2010 campaign also was a success, as he led the Bears to a 10-6-3 overall mark and a fourth-place finish in the Big Sky. The team qualified for its second trip to the Big Sky Conference tournament after the season.

After leading the Bears to back-to-back NCAA tournaments at the Division II level, Barrera helped Northern Colorado through the reclassification process to Division I, which the athletic department completed before the 2007 school year. He proceeded to lead the Bears to the Big Sky Conference championship game in their first year of postseason eligibility since the reclassification. It was the first time in school history that any sport had accomplished such a feat. 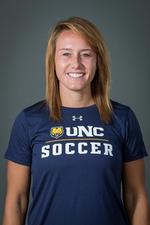 Amy Kolowsky joined the staff at Northern Colorado in the spring of 2020.

She spent five years at Appalachian State, prior to joining the staff in Greeley. Kolowsky was the goalkeeper's coach for the Mountaineers helping them to four Sun Belt Conference tournament appearances in five years.

Kolowsky played at Appalachian State before starting her coaching career as a goalkeepers. She ranks fifth in program history for single season saves (95) and sixth for career saves (131).